Properties to rent in Exeter

Properties to rent in Exeter 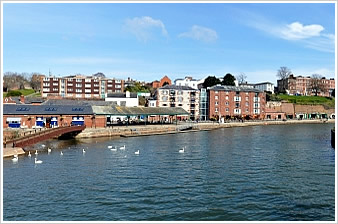 Over the last ten years, Exeter has become a property hot spot and is consistently voted one of the best places to live in the UK.

Set in the heart of Devon, the historic city is home to a university, a medieval cathedral, Georgian shops, leafy avenues and cobbled streets, while beautiful countryside and some of the country’s finest beaches are just a short journey away.

Property to rent in Exeter

As one of the largest urban areas in the West Country, there is a good choice of apartments to let in Exeter with options to suit every budget. From student accomodation for Exeter university to modern apartments for the young professional.

By train, Exeter is two hours from London, an hour away from Bristol and it also has direct connections from other major cities, including Birmingham, Manchester and Leeds.

The city has its own airport, Exeter International Airport, which handles a growing number of passengers each year from international and domestic routes.

The redevelopment of the Princesshay area is a shining example of contemporary city-centre regeneration. Shops, restaurants, apartments, public spaces and multi-storey car parking have replaced an unattractive collection of post-war shops and cafes.
The city boasts a well-established network of childcare facilities, schools, places of worship, public libraries, healthcare facilities and sports and leisure centres.

As the county town of Devon and a buzzing University town, it’s unsurprising that two of Exeter’s major employers are Devon County Council and Exeter University.

Public administration, education and health provide over a third of the jobs in the region, while the services sector and banking and insurance sectors are also well represented.

Culturally, Exeter has much to offer. There are theatres, cinemas, galleries, nightclubs and live music venues across the city providing entertainment for people of all ages and lifestyles.

Eating out in Exeter

As a city surrounded by some of the most productive agricultural land in the country and a coastline delivering quality seafood, Exeter is spoilt for choice when it comes to high quality local produce and is quickly gaining a reputation for good food.

Local produce is not the only dish on the menu though; the city’s mix of popular chains and independent restaurants serve up cuisine from all over the world, offering something to suit everyone.